Can an employer terminate an employee's employment if the employee refuses a validly ordered rapid test? Yes, even if there is no legal obligation for employees to take the test. At least, that is how the Hamburg Labor Court recently ruled. Accordingly, the refusal of an unvaccinated employee (working as a driver in passenger transportation) to comply with the Corona (rapid) test obligation ordered by the employer constitutes a culpable breach of his contractual labor obligations. However, an effective (conduct-related) termination based on this in accordance with Section 2 (2) of the German Unfair Dismissals Act (KSchG) requires that the employee has previously been properly warned by the employer in vain (ultima ratio principle).

Although the court found the dismissal to be socially unjustified in the absence of a prior warning to the employee, the Hamburg Labor Court took the opportunity to examine the question of the legality of the ordered rapid test in detail and affirmed it clearly; a ruling with a signal effect.

In the opinion of the court, in the specific case, even before the entry into force of the 3G duty at the workplace, which now applies in accordance with Section 28b of the Infection Protection Act, there was a contractual duty for unvaccinated employees to comply with a Corona test ordered by the employer. Interference in the physical integrity as well as in the general personal rights of the employees is so minor when a rapid test is ordered that it is subordinated to the interests of the employer to protect employees and customers from a Corona infection.

In the opinion of the court, a rapid test in the anterior nasal region does hardly interfere with the rights of the employee. These are opposed by more weighty interests of the employer, in particular the protection of customers and employees from the risk of infection and from serious health consequences. The primary objective of an obligation to test, to identify persons who are potentially infectious and to prevent them in good time from infecting other persons unnoticed, is of great relevance here. The consequences of a corona infection - often with considerable damage to health, sometimes associated with a fatal outcome or with late and long-term consequences - are, even in milder cases, many times more unpleasant and, in particular, abstractly more dangerous than a self-test. In particular, provided rapid tests that require a swab in the anterior-not posterior-nasal region are, in the court's view, just as non-invasive as gargle or spit tests.

The court also addressed the much-discussed issue of the legality of supervised on-site testing by employers. Neither the general right of personality nor the resulting right to informational self-determination of the person to be tested is unduly interfered with by the corresponding instruction. The court rejected any fundamental doubts as to the compatibility with the employee's general right to privacy, in particular because the test was/should be carried out on site only once in the specific case. The chamber classified the amount of data obtained during the test as basically manageable. In the case of a positive test result, the employer can only assume that the employee has been infected with the Corona Virus. Further information, such as whether the employee has been vaccinated, where he was infected or whether a subsequent PCR test is positive, is not (automatically) disclosed to the employer. The same applies in the case of a negative test result. Here, too, the employer only receives a snapshot. The objection sometimes raised against on-site testing, namely that employers would thereby obtain DNA material from their employees, plays only a subordinate role in the process of weighing interests, according to the court. This is because even outside the pandemic, an employer as well as any other person can gain access to DNA material of a specific person, e.g. through hair that has fallen out or skin scales that have fallen off. Mere testing, without specific evidence, does not create a concern that the employer will use the DNA material for other purposes.

Other protective measures already taken - such as a partition wall or a mask requirement - are also not capable of eliminating the necessity and legitimacy of additional self-tests. In any case, cumulative measures also mean a higher level of protection in the case of close spatial contact with different persons, at least until the risk of dangerous courses has been significantly reduced by nationwide immunization. 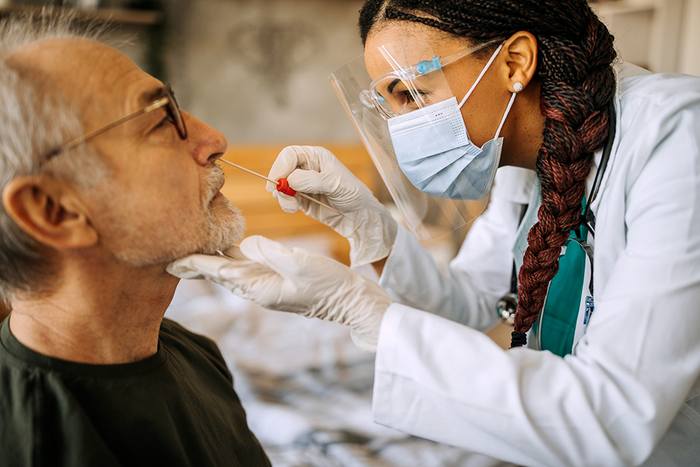